What does Cookie Monster and a 79-Series “Chop Top” Land Cruiser have to do with a bunch Rebels with Guns? Do you even Paco Pomet Much?

What does Cookie Monster and a 79-Series “Chop Top” Land Cruiser have to do with a bunch Rebels with Guns?
by: Rodney Wills / Red Line Land Cruisers

We’ve all seen this image floating around the inter-webs for some time…
It’s striking, jarring, and evokes all kinds of emotion, especially from us Toyota Land Cruisers enthusiast! 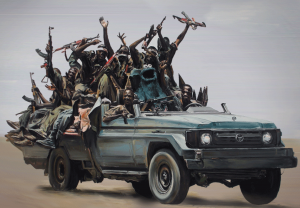 Maybe you have seen this image, maybe you’ve not? But either way, seeing how you are here on the Red Line Land Cruisers webpage, you must be a Toyota Land Cruiser Fan! Check! Upon seeing this image, it is very striking! It is serious, wild and funny – all at the same time. It evokes some type of emotion one way or another! IF NOT, CHECK YOUR BLOOD PRESSURE & CALL AN AMBULANCE!

I recently came across the image again while checking out the Toyota Land Cruiser Marketplace Facebook Group Page. This time I just had to dig beyond the surface of looking at it and wondering. This particular time I can clearly see its not just a photo with a picture of Cookie Monster simply pasted in… IT’S A PAINTING! But it could be a digital painting. Yes, they have that technology now! But maybe it is a traditional paint-on-canvas painting! If it’s an actual painting, that implies there is an original! Maybe it was originally a news reel photo of rebels in the 79-Series and the artist painted Cookie Monster into the scene. “WHY?” you might ask?! I don’t know, but I want to find out and know more!

Was the painting made from an actual photo? If so, who took the original photo? And if this painting was made from an actual photo, it’s how dare those guys chop off the roof the the 79-Series Land Cruiser! WHAT SACRILEGE! Hate whomever you want, but DO NOT CUT the Land Cruiser up like that! Especially when we can not even get this particular series of Land Cruisers here in the USA – The 70-Series! There is a page called “Toyota: Bring the 70 Series Land Cruiser and Diesels to the USA.” Yes, we all love what we can’t have!

Ok, yeah, so we too here at Red Line Land Cruisers have chopped up a number of FJ40’s but they were a dime-a-dozen back then… I’m sure it’s the same for the 70-Series over there, wherever there is? Another question… Where is there?

I am simply not satisfied with just the artwork itself at digital surface value! Somewhere in the world, someone actually painted this digitally or hand-painted! I simply wanted to know more! What is back story of who painted this, where did his idea come from? Why Cookie Monster? Maybe we will get a little cultural education from someone about these rebels and their war. It’s crazy how one vehicle ties so many things together!

Onward for the search of what does Cookie Monster and a 79-Series “Chop Top” Land Cruiser have to do with a bunch Rebels with guns? With a little Google Search of “cookie monster toyota land cruiser” and a tap of “images” resulted this: 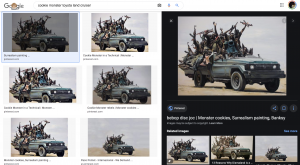 We started clicking several of these images to see where they would lead us to in hopes of finding an “original source.” You know the game, keep scrolling on the WWW in the “BIG GAME HUNT” of whatever your looking for. 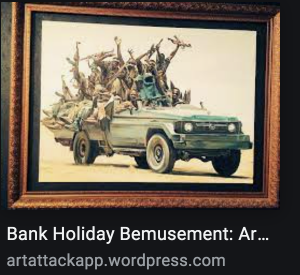 One particular Google thumbnail image caught the eye as the artwork is shown in what looks like something between a Gilded Victorian gold picture frame and/or an Arts And Crafts Movement gold picture frame! CLICK!

It took us to a post titled “BANK HOLIDAY BEMUSEMENT: ARTATTACK GOES TO DISMALAND by ART ATTACK”


NOW WE ARE ONTO SOMETHING!

I did a quick scroll down to see if I could find the artwork that I saw in the Google thumbnail and quite a ways down on the lengthy page, there it is! So back to the top to fully read India Irving‘s post from September of 2015! Reading through her post, I discovered that the artwork was submitted as part of the 2015 Banksy’s Dismaland Bemusement Park Show. Now I’m really tripping! Seriously, we are talking about Banksy amid the chase of a 79-Series Land Cruiser image! But more on the show and Banksy down below! Let’s stay on track about this single piece of art work! 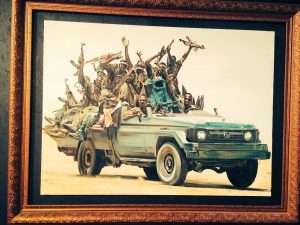 As I scrolled India’s story about the art show, I run across her image of the painting and the statement, “Paco Pomet, who’s painting of cookie monster riding along in a truck full of masked fighters, was one of our favourite works of the evening.” THIS IS IT!!!

So in any rightful pursuit of the arts, I must continue! I searched “paco pomet” in another tab of another Google search! My anticipation is running high as I click the url showing http://pacopomet.com/en/! 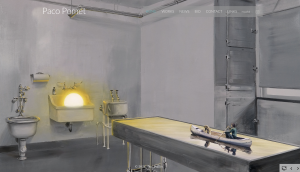 Paco Pomet lives and works in Granada, Spain. I’ve contacted him directly via his website-email and await response from him as I have lots of questions to ask him! As of this writing, still no response back, but that is how it goes in the art world! The mystique continues!

Banksy’s Dismaland Bemusement Park Show was a temporary art project organized by street artist Banksy in the seaside resort of Weston-super-Mare in Somerset, England. Prepared in secret, the pop-up exhibition at the Tropicana, a disused lido, was “a sinister twist on Disneyland” that opened during the weekend of August 21st, 2015 and closed 36 days later on September 27th, 2015. Banksy described it as a “family theme park unsuitable for children.” The aesthetic of the “bemusement park” was potentially inspired by the “Dismayland” series of paintings created by American artist Jeff Gillette, who also participated in the exhibition.

Banksy created ten new works and funded the construction of the exhibition himself. The show featured 58 artists of the 60 Banksy originally invited to participate. 4,000 tickets were available for purchase per day, priced at £3 each or $4.25 USD. The art show received 150,000 visitors in the five-week period it was open. After it closed, the building material for the project was repurposed as shelters for refugees in the “Calais Jungle” where Banksy also added murals. I had to look that jungle up too! The Calais Jungle, officially known as Camp de la Lande, located on a former landfill site to the east of Calais. France. This site is where refugees camped from January 2015 to October 2016 while they attempted to enter the United Kingdom, or while they awaited their French asylum claims to be processed. 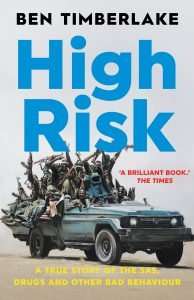 Here is an interesting twist of Paco Pomet’s “Internacional” painting as Ben Timberlake’s 2021 book release features Paco Pomet’s “Internacional” painting on the cover, titled, “High Risk: A True Story of the SAS, Drugs, and Other Bad Behaviour”
Book: https://www.amazon.com/High-Risk-Story-Drugs-Behaviour/dp/1787384632
According to Hurst Publishing, Ben is a is a security consultant and medic in high-risk areas, specialising in Iraq and Syria. In a previous life his undercover missions concerned nuclear terrorism, the Far Right, and the trafficking of people, wildlife, looted antiquities and organs. He has written for the Financial Times, The Guardian and The Economist, and made Channel 4 and Discovery films on topics from Japanese mummies to prehistoric rock art.

While this particular piece of art from Paco Pomet stirs many emotions from so many directions, back on October 6, 2015, just days after the closing of the Dismaland Bemusement Park Show, ABC News posted the story, “US Officials Ask How ISIS Got So Many Toyota Trucks” as “Scores of Toyota pickups seen in terror videos to dismay of Iraqi officials.” This story was assembled by Matthew Mosk, Brian Ross and Alex Hosenball. I’m not saying that the art work of Paco Pomet triggered an “international alarm” but the timing of it all was quite “timely!”

In their world, these 70-Series Land Cruisers are referred to as Type-1 Technicals per a story in a 2011 issue of Bloombeg, called Libya’s War Wagons. https://www.bloomberg.com/news/articles/2011-12-22/libyas-war-wagons 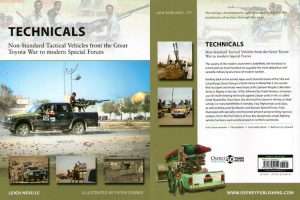 Give this book review a read:
https://www.joint-forces.com/book-reviews/12173-osprey-new-vanguard-257-technicals

Want your own armored 70-Series?
https://www.armoredcars.com/vehicles/armored-toyota-land-cruiser-79/

And of course if it exists in the full size world, then it has a scale model versions to physically realize your fascination – in scale form! 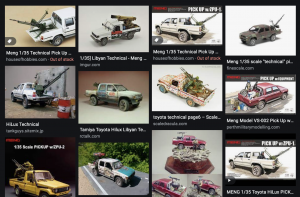 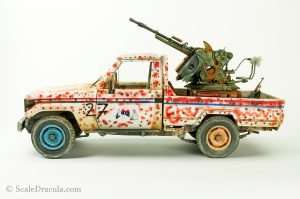 Check out the scale Type-1 Technical by ScaleDracula – see all the images here:
https://www.scaledracula.com/toyota-technical-page6/

ALL OF THIS LEADS US TO…
JALOPNIK’s Adam Ismail reports:
There’s A Very Specific Reason Behind Toyota’s Anti-Resale Policy On New Land Cruisers
The automaker is attempting to curb sales of its popular new truck to “specific areas where security is regulated.”