Lets first start with, how many of you are DAKAR FANS??? We know you are Toyota Land Cruisers fans, so this is a natural! Is your Google Calendar already marked for January 2, 2022 for the 44th edition of the Dakar Rally organized by Amaury Sport Organization (ASO). The event will take place January 2nd through January 14th, 2022 in Saudi Arabia.

MOTOR1.com’s Chris Bruce dropped this story on us WITH VIDEO, published by Brian Potter about the Toyota GR DKR Hilux T1+ for Dakar 2022 as TOYOTA GAZOO Racing is preparing a 4-crew / 4-truck assault on the 2022 DAKAR RALLY! 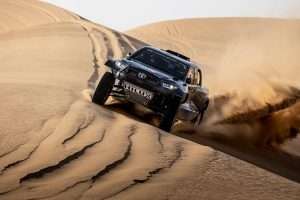 Toyota has participated in the race since the beginning in 1979, with 13 of the 74 vehicles that finished being Toyota vehicles. Team Land Cruiser Toyota Auto Body have been entering their Land Cruiser ever year in to the rally since 1995, under the Team Araco name until 2004.