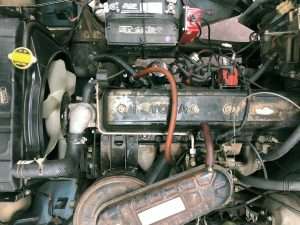 After the Korean war, Toyota Motor Co., Ltd. continued development efforts based on previous development of the B & D-Series engines. In December 1948 Toyota completed a prototype of the F engine by enlarging the bore of the B engine to 90 millimeters. The F engine was initially installed only in the Model BM truck to be exported to Brazil and other countries, but a Japanese model was added in 1950.

The Toyota F engine block, crankshaft and lower end assembly is loosely based on the 1939-63 G.M.C. L6 OHV 235 engine but with a taller deck (rather than the similar but smaller Chevrolet 1937-63 Gen-2 L6 OHV engine), and built under license. The cylinder head and combustion chamber is derived from the Chevrolet L6 OHV “stovebolt” engine, slightly scaled up. The general idea was consumers would feel comfortable with the engine since it was a familiar design and had a proven track record. Although, none of the Toyota F engine bottom end is interchangeable with the Chevy engines.

First introduced in export models of the 4-ton BM (FM) truck in November 1949 with 6.4:1 compression and 95 PS (70 kW), it then found its way into the Toyota FX/FZ in September 1951. Beginning in 1954 it became installed in the long running FA/FC series of trucks; this was also when the combustion chambers were reworked and the compression ratio was increased, upping output to 105 PS (77 kW).

The FB type bus also used this engine, as did the Toyota Massy Dyna FC10. From 1964 until 1975 the FA100 truck (and derivatives) used a 130 PS (96 kW) F engine, although by this time, diesel-engined trucks found more favor in the market. A variety of fire trucks and special bodied patrol cars also used the F engine.