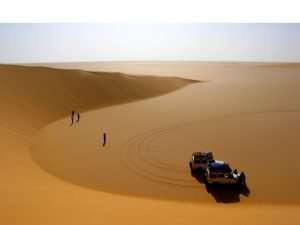 “He wasn’t always a Land Cruiser devotee,
but quickly discovered it’s the most trusted vehicle in the world. “I had my Land Rover phase, obviously coming from Britain you naturally think that is the right fit but when you get outside of the UK you realize that the world isn’t entirely dominated by Land Rovers.”

With over 50 overlanding expeditions under his belt, the majority in the Sahara Desert, Chris Scott has literally written the book on crossing the Sahara Desert with such books as Sahara Overland, Overlanders’ Handbook, and the Adventure Motorcycling Handbook, just to name a few that have become bibles for anyone looking to venture into the “great dune of unknown.” Recently, Jake Weaver, Content Manager at Toyota UK Magazine, was chatting with Chris Scott about all things Overlanding and Toyota Land Cruisers while both were attending the Adventure Travel Film Festival. 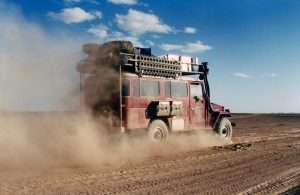 Chris’s weapon of choice is a trusty, if slightly rusty, Toyota Land Cruiser. But when asked which Land Cruiser he prefers, Chris states, Older and simpler are key in my book!” The newer Land Cruisers are great with very complex with lots of computers and electronic aids, but out in the desert he prefers “The Less Is More” theory of the older Land Cruisers. But when Jake asked Chris about doing a new tour, which Land Cruiser would he prefer and Chris pondered this a bit and stated, “I’d need a heavy load carrier like a pick-up so a Hilux would be great!”

When asked, Are there any of your previous Land Cruisers that you have regretted selling?
Chris stated “I really enjoyed the FJ45 that I had in Australia just because it was with me for a whole year driving around the Northern Territory and Western Australia doing research for one of my books. It was quite a rough engine, it burnt through huge amounts of oil but as long as it was kept topped up it would always keep ploughing on for countless miles of rough going.” 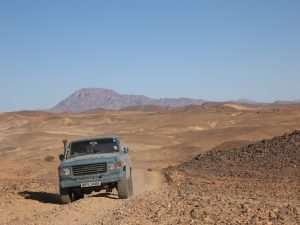 “Another Land Cruiser I was fond of was an HJ61 which I got for £8000 and was the most expensive vehicle I’d bought at the time. It lasted me half a dozen trips in the Sahara, all over Mauritania, Libya, Morocco and many more countries. It wasn’t the best for driving around town with its stiff suspension but the engine was great, it was very comfortable but for the desert, it was a great load carrier as I could pile it with fuel and supplies.”