When you are a Toyota Land Cruiser fan and also a motorsport fan, it’s simply natural for us to gravitate towards the adventures of the Dakar Rally! as Toyota vehicles have participated in the Dakar Rally Raid since the VERY beginning in 1979!  Thirteen of the 74 vehicles that finished were Toyota’s! According to Dakar D’anTan‘s 1979 entry list, a quick “Control-F Search” shows there were 25 Toyota vehicle’s entered into the event. 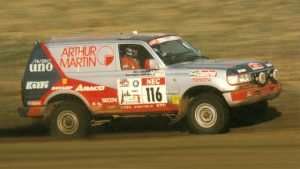 Team Land Cruiser Auto Body (TLC) have entered their Land Cruisers ever year in the Dakar rally since 1995, initially under the Team Araco name until 2004. As of 2021, the team has achieved eight consecutive victories in the diesel production car class.

Toyota Auto Body TAB (トヨタ車体) is a manufacturing subsidiary of the Toyota group based in Japan. The company was formed through a corporate spin-off from Toyota. In its early years, it produced auto bodies. In the late 1950s and early 1960s, TAB manufactured truck bodies before slowly switching to light vehicles (mostly vans) from the late 1960s onwards. In the 2000s, it absorbed the vehicle manufacturing operations of sister companies Araco and Gifu Auto Body. As part of Toyota, Toyota Auto Body develops and produces a range of minivans, SUVs, light commercial vehicles and auto parts.

“8 Consecutive Wins is Still Halfway” –  Interview with Dakar Rally Winning Team
In this story, Toyota Times presents an interview that the editorial team conducted with rally driver Akira Miura, who won in his class in the Dakar Rally, which is known to be the toughest motorsports event in the world.
https://toyotatimes.jp/en/insidetoyota/113.html