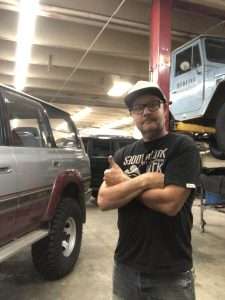 In his “multi-hat” position, Wills will be responsible for all Marketing efforts and more! Serving just over 7-years as Marketing Manager at Axial R/C Inc. plus a “lifetime” of experiences in media, marketing and “garage-mechanicing” will aid in the many tasks to be taken on at Red Line Land Cruisers. Rodney’s background and knowledge in various industries including automotive, powersports, motorsports and action-sports make him a great addition to the Red Line Land Cruisers team.

Rodney released the following statement:
Red Line Land Cruisers is known for their 40-Series restoration & resto-mod builds, EFI Sniper adaptations to 2F engines, 60-Series engine transplants, but RLLC is also moving more into the 80-Series Toyota Land Cruisers segment! I love the 80-Series! But too, I love all Toyota Land Cruisers! I especially like the 55-Series for it’s body lines, but I initially thought I would own a 62-Series out of practicality. Back 2008 when we where paying $5.40 per gallon of gas, a 1992 80-Series came into my life and dubbed it the ADV80. I’ve known the Red Line Land Cruisers name through the IH8MUD Land Cruiser Community Forum, but never-in-a-day could I have imagined I would actually be working here! The world is a funny round place!

Red Line Land Cruisers was founded in July of 2007 by Justin Robbins. Justin has been a Toyota Land Cruiser enthusiast since his first one at age 17! Most Toyota off-road enthusiasts start with an old pickup truck, but Robbins started with a 1978 40-Series. Like most Coloradian’s, they built their 40-Series into serious “trail-crawlers” or street-legal trail-going rock-crawlers as these guys drove their rigs to the trails partly because the trails are closer to home in comparison to say, King of the Hammers is to Orange County, California.

Now that I am a part of the Red Line Land Cruisers team, I am looking forward to growing with the company and building the brand! I love great “start-up’s”, but these guys already have a great history within the Toyota Land Cruiser community and a whole lot of potential to grown to the next level! With the company turning 15-years young in 2022, we are excited about the future!