FJ DIY (Do It Yourself)

That FJ40 bottle jack. It’s a thing of beauty. If you’re lucky enough to have the original one in your Toyota Land Cruiser, then it’s probably been scratched up pretty good under the driver’s seat and could use a bit of a refresh on the paint. That orangish yellowish color can be pretty tricky to nail down. It’s not quite yellow and not quite orange, but somewhere in between.

About a year ago we were restoring a 1977 FJ40 and were lucky enough to come across a bottle jack, both jack handles, and the crank for the handle on Craigslist. The color was pretty faded, so we began the search for the right paint. Sure, we could go down and have a quart of the good stuff mixed up at Dale’s Automotive Paint Supply in Colorado Springs, but then we’re talking $60 and our budget was more like $10 (scope creep on this 77′ LC had definitely set in!).

We hit the spray paint isle in a couple big box stores, namely Home Depot and Wal-Mart, but came up with a big goose-egg. Next stop was Pep Boys, who had a massive selection. We honed in on two different paints and found one that hit the jackpot: Dupli-Color  Model # DA1663 “School Bus Yellow” General Purpose Acrylic Enamel (12 oz.).

Back at the shop, we sanded and primed the bottle jack, hand crank, and jack rods. After the y dried, we hung the parts up by a wire and went to town with the School Bus Yellow spray paint. It laid on nice and thick and smooth. After three coats, our old, crappy looking bottle jack was now a thing of beauty!

Have you used a different paint or different method? If so, share it in the comments section below. 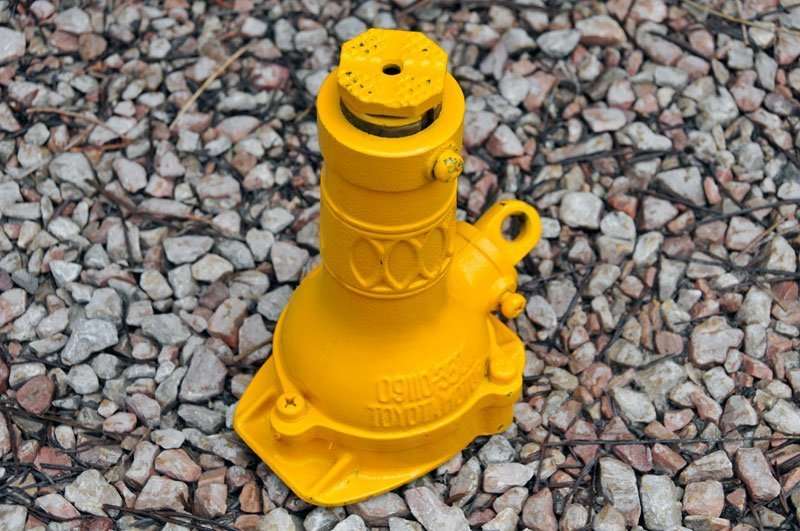