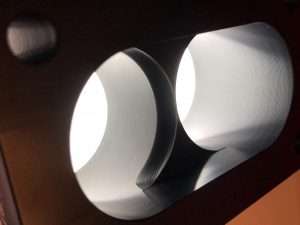 This is the (second generation) Red Line Holley Sniper 2F EFI Manifold Adapter! We are always looking for those little “bonus gains” as we want to help you make the most from the Holley Sniper 2300 2BBL kit addition to the 2F Toyota Land Cruiser Engine! 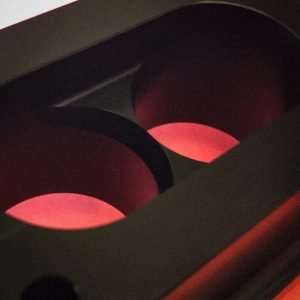 This new design netted a 4-CFM gain over the original design!

We achieved an 7% increase in air flow efficiency, netting a 4-cu ft/min gain with the newly designed RL1024 Red Line Holley Sniper 2F EFI Manifold Adapter over the previous version, helping flow more air into these 2F engines! But, it’s not just about “more” and overall numbers, we made gains primarily in torque delivery due to design changes effecting air-flow delivery. Why are we chasing tiny details? It is said that for every CFM gained nets a 1.8 to 2.2-HP gain. Yes, we are splitting hairs, but it’s in our our DNA!

When we initially started the process of adapting the Holley Sniper 2300 DBBL system to the 2F Toyota Land Cruiser engine, we started with an “open-deck” manifold adapter design as we were simply fitting the EFI headunit to the inline six engine’s intake manifold to collect data of the internal aerodynamic qualities of inline six 2F “tractor” engine. We had to start somewhere, but because we are old motorsport heads, we couldn’t help to attempt to extract a scratch more torque from manifold adapter and could not just leave it as an “open-deck” manifold design.

Behind our 2F tractor engines, we are also motorsport enthusiast! Our background in motorsports has netted us some close friends! We have a very close relationship with our engine shop with state-of-the-art engine dyno and flow bench capabilities and we are withholding his name/info by their request. We also have a very special relationship with Crazy Steel Customs. Their aerospace design and manufacturing operation houses top-level CNC machines! They too are very tied to motorsport and with their aid, we’ve been afforded to explore possibilities and physically materialize ideas! 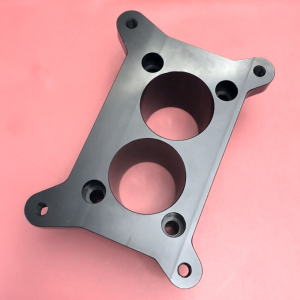 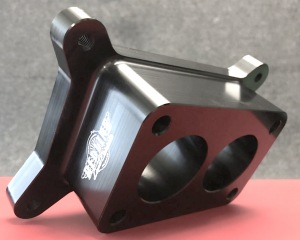 Technically our second design, but first product offering of the RL1024 Red Line Holley Sniper 2F EFI Manifold Adapter was inspired by the velocity stacks sitting on DCO side-drafts & ITB’s hanging out of Sprint Cars! OK, maybe a little inspiration of some Deep-V’s on Mikuni 44mm sidedrafts hanging off a 22R too! But the theory is, an engine’s power profile can be adjusted by the length and internal tube shape of velocity stacks. It’s all about controlling air as it mixes with fuel as it leads to the spark and we’ve played in these motorsport arena’s for many years! But with the F/2F Toyota engines we are limited, confined by the overall height of the manifold as we make use of the stock Toyota air filter system sandwiching the Holley EFI headunit.

Within these “limitations” finding “advantages” by shaping the air “flow” to fuel mixture to the spark, simply gets us excited! Yes, we are simply talking about F/2F inline six “tractor” engines, but we love them and are constantly thinking, researching and testing how to make the most of a little air and fuel combustion inside FJ40 Toyota Land Cruiser engines!

The Toyota 2F engine has a natural “ceiling” of performance and as you increase power, you cut into durability or longevity. Many of these 2F engines are on there “last leg” after 34 to 47-years of service. But too, many of them have been sitting dormant due to other issues such as electric gremlins, *bad carburetors or long term storage. *Toyota carbs are not bad, just badly taken care of and or improperly rebuilt!

We love bringing F/2F Toyota engine’s back to life and hopefully netting another 100,000-miles out of them that was previously not obtained! And then we love to make them work more efficiently with more torque and ponies, while also getting better fuel milage! That’s where the Holley Sniper 2300 2BBL comes in as we’ve made it as smooth as possible to adapt the EFI headunit to the F and 2F Toyota engine using the factory intake manifold while also making use of the factory Toyota air cleaner system – making use of our F & 2F Air Filter Adapter Kits.

But it all starts with the F/2F REVIVAL! Maybe yours is running, it’s still a good idea to give it a full tuneup to give it the best possible leg forward transitioning from a carburetor to an electronic fuel injection system. Maybe you saw our HOW TO: REVIVE AN F-SERIES ENGINE THAT HAS BEENG SITTING DORMANT? OR SAVE AN F! How To Save An F Series Engine & 2F SNIPER 101 – WHERE TO START? articles.

We love horsepower! But don’t get us wrong, we love torque and reliability especially when we are talking Toyota Land Cruiser engines! Years of knowledge have been gained since 1923 when Edoardo Weber founded his passion for “Doppio Corpo Orizzontale” that’s Italian for “Double Body Horizontal Side Drafts!” With the advent of Electronic Fuel Injection with “repeatable controllability,” EFI has ramped the learning curve and we wish to “sprinkle” as much of that “collected data knowledge” to these old engines for our modern world!