FJ DIY (Do It Yourself)

I’m working on restoring a 1975 Toyota Land Cruiser FJ40. It’s an early 75, so it has drum brakes all around (and thus drum-style wheels). There are a couple different ways to go about restoring these rims. I could have them sandblasted (aka media blasted), which would cost around $100-150. Since I’m on a budget, I decided to go the wire cup brush route. I found a Milwaukee 3″ wire cup brush that screws on to my angle grinder at Home Depot for around $19. It was more than I wanted to spend, but cheaper than having them sand blasted.

There are some projects where you can cheat and go without protection. This project isn’t one of them (as you’ll see in an image further down the page). Eye protection is critical, so DO NOT run that angle grinder with the wire cup brush without proper eye protection. I also wore a dust mask, as the rust that gets kicked into the air was pretty thick and nasty. To keep myself from going deaf, I also threw on some ear protection (which was a good idea because this process can take several hours). 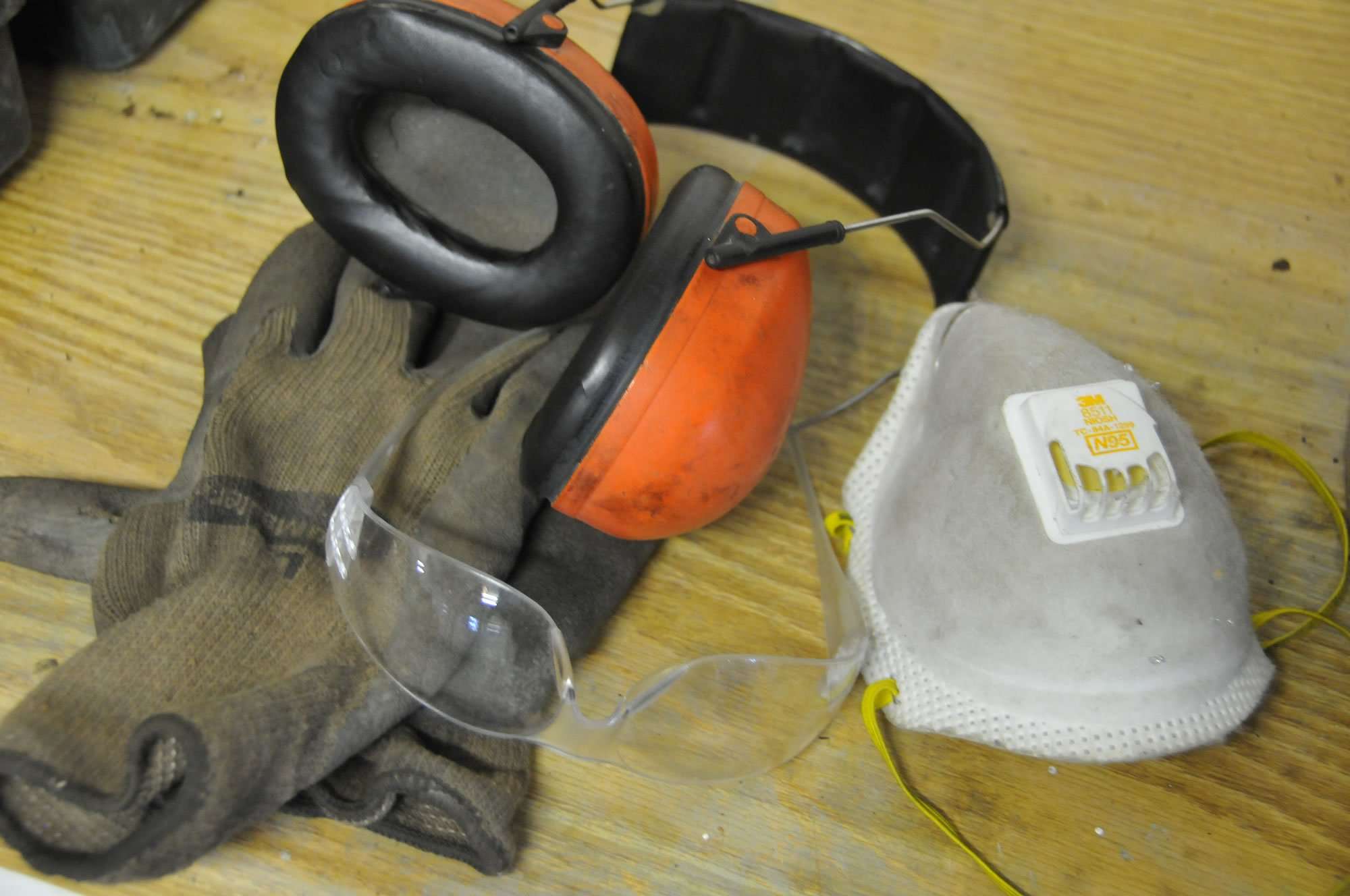 Find a good place with plenty of space to work. It was freezing here in Colorado when I was working on these rims, so I did it in my garage on my work bench. If the weather is decent, I’d recommend doing this project outside where the dust and debris can go wherever it pleases and you’ll have less to clean up.

Here are a few pics of my wheels before I started the restoration process. 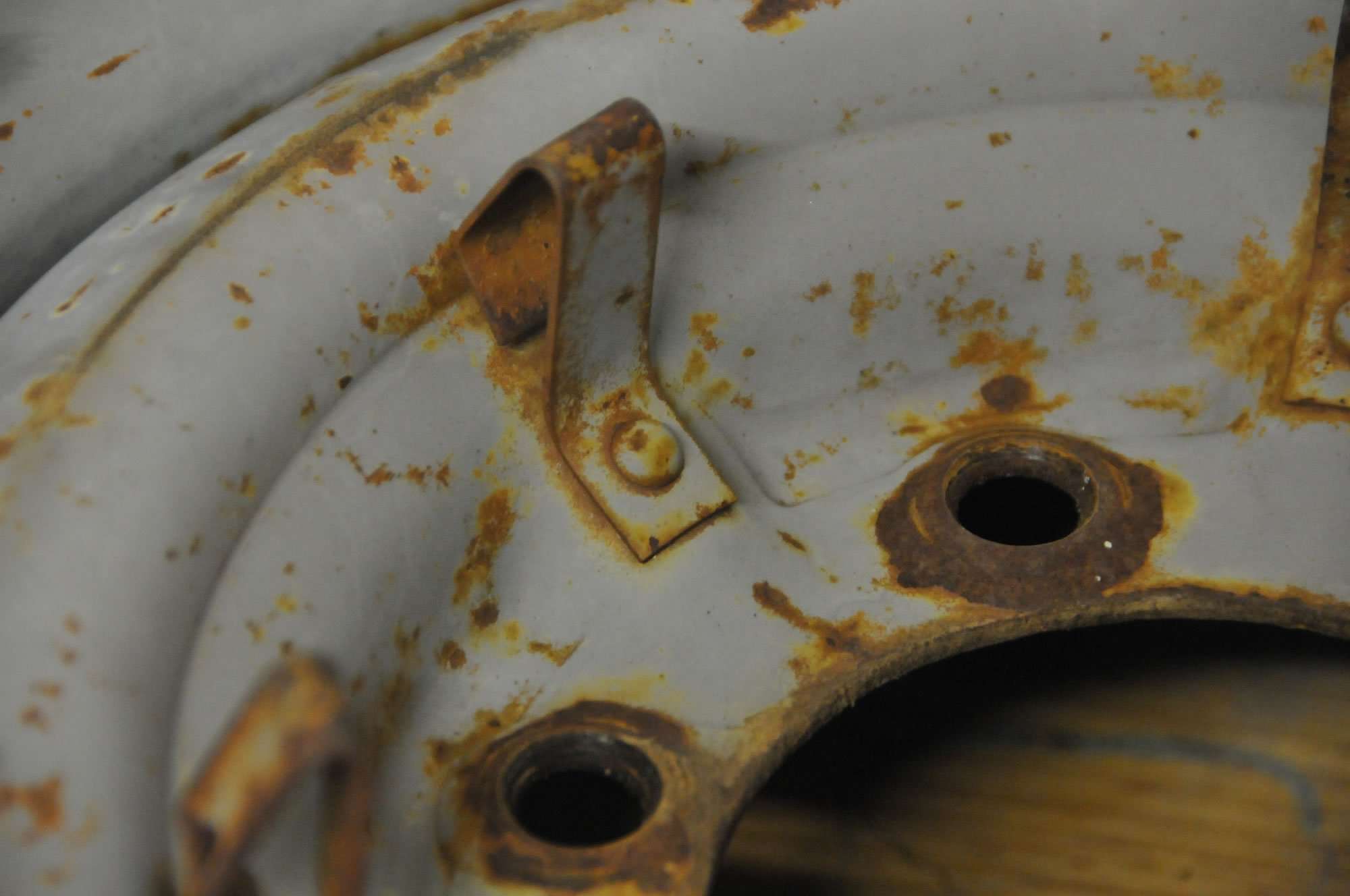 Screw on your wire cup brush and make sure it’s nice and tight. I used a crescent wrench (while pressing in the spindle lock on my angle grinder) to make sure it was nice and snug. You don’t want this thing coming off at 11,000 RPM.

You can see in this pic I’m only wearing one glove. That was only because I was managing the camera to take the pics. Be sure to wear two gloves. As you begin the process of stripping down the rims with the wire brush, little pieces of metal fly all over the place. I had several go through my gloves and poke me pretty good. When I went to shower off, I took off my shirt and found two pieces sticking into my flesh. Those little suckers go flying like crazy, so make sure you’re hands are protected.

Hold the angle grinder tight with both hands, especially when you get around to working near the clips. Don’t hit the clips with the brush. Instead, use sandpaper and hit those by hand. I learned my lesson the hard way when one of my clips broke off because the wire brush is just too powerful and snapped it right off.

Start with the edges.

After tearing down the front, backs and edges of two and half rims, my Milwaukee 3″ wire cup brush pretty much gave it up as there were hardly any wires left. Towards the end of the life of this wire brush, more and more wires were flying off faster and faster because there weren’t as many wires compacted together to hold them in.

As $20 was steep enough for one wire cup brush, I worked a bit harder to find one a bit cheaper. I found another flavor of the 3″ wire cup brush at my local O’Reilly’s Auto Parts store for $13.

I continued on with the new wire brush, but unfortunately (and is usually the case) the cheaper wire brush was…well…cheap. It didn’t last nearly as long as the Milwaukee wire cup brush. It was enough to finish the job, but next time I’ll spring for the better quality wire brush.

Below you can see some of the wires that came off the cheaper brush en-masse piled up on the inside of the rim.

This wire brush wire hit a little too close to home…

As you can see, the wire cup brush did an okay job cleaning up the rims. I couldn’t get in very close where the clips were and in a couple other areas.

At the end of the day I decided to go ahead and media blast these. Below is a video documenting that process.