Books about Toyota Land Cruisers, On The Shelf

Books about Toyota Land Cruisers, On The Shelf

How many of you collect Toyota Land Cruiser books? Not the manuals or service books, but one’s about the history and such. Here are a few to hunt down for your book shelf collection! 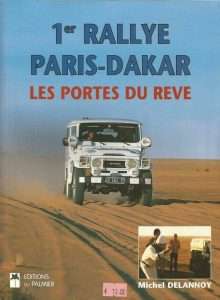 1er Rallye Paris-Dakar Les Portes Du Reve by Michel DeLannoy
Book is written in French, but I purchased it anyhow for the history and images! While this book is technically not about Toyota Land Cruisers, you can see on the cover a find example of an FJ40 in competition for the first ever Dakar Rally. But of the thirteen of the 74 vehicles that finished were Toyota’s! • It is 1978 Christmas Eve, and in the grey Parisian winter, motorbikes, cars and colorful trucks are lined up along the fountains of the Trocadero. The few spectators do not seem to want to believe that this merry band of crazies is going to race across Africa. They don’t worry, are together, for the enjoyment, sun, dust, adventure. There are some expert young men on cars and motorbikes, but absolutely no professional drivers and the preparation of the vehicles is always very simple, sometimes inexistent. A week later, Max Meynier’s broadcast on RTL and the articles by the few journalists present suddenly turn this race into the number one event in France. It was in the midst of indescribable enthusiasm and unexpected rain that the little caravan of daredevils at the wheel arrived at Dakar… the legend is born.
Source: https://www.gilena.it/en/cart/ 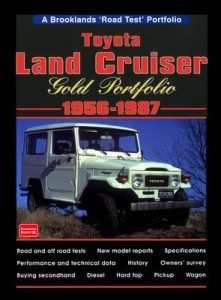 Toyota Land Cruiser 1956-1987 by R M Clarke – The first Land Cruiser appeared at about the same time as the Land-Rover. Styling changes occurred in 1952 with the modern range designated F25s and F28s. The FJ43 appeared in the mid-1960s, the 40 and 45 Series in Australia in 1967/8. The FJ55 was introduced in 1969, the 43 series continued to be made in Japan and the 40 and 45 Series had improvements made throughout the 1970s. Production of the FJ55 ceased in 1980 to be followed by the Series 60. This was only available with an in-line, six-cylinder engine of 3980cc. A generous five-seater, and good load carrier, there were few changes made to it after production commenced. This is a book of contemporary road & comparison tests, new model introductions, technical & specification data, driving impressions, of road tests, long-term reports, buying second hand. Models covered include: – FWD Pick-up, Station Wagon, LX, De Luxe, Diesel. With a total of 172 fully illustrated pages. SKU: TOYLGP ISBN: 9781855203983 Brooklands Books 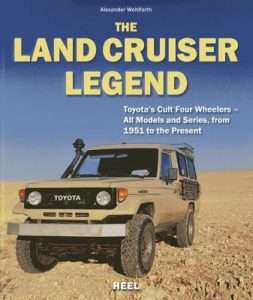 The Land Cruiser Legend: Toyota’s Cult Four Wheelers: All Models and Series, from 1951 to the Present by Alexander Wohlfarth – Developed in 1951, as Toyota’s version of a Jeep-like vehicle, it has since been produced in convertible, hardtop, station wagon and utility truck versions plus its flagship 4WD vehicle. Its reliability, longevity, and performance in the toughest environmental conditions have led to its huge popularity. This complete history includes technical specs of all models and production lines, and also describes the people who drive them and their philosophy of this type of car – whether they use it for fun or business. Also included is a separate timeline-poster of the history of the Land Cruiser. 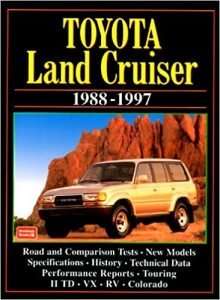 Toyota Land Cruiser: 1988-1997 by R M Clarke – By the time Toyota introduced the 7-series Land Cruisers during the 1980s, the brand was well established and stood for ruggedness and reliability in the light 4×4 world. But by this stage, the 4×4 market had also begun to open up; the light 4×4 was no longer a utility vehicle pure and simple, but it had taken on a new dimension of refinement to give it appeal as an alternative to the conventional family estate. First in this market had been the American sport-utilities of the 1960s, followed by the Range Rover in 1970; and then in 1981 Mitsubishi had introduced the Pajero (Shogun) and Isuzu the Trooper (Big Horn or Rodeo). So the 70-series had a new challenge. Not only was it to take up the mantle of the long-established utility and military Land Cruisers, but it also had to present a credible alternative to the new generation of 4×4 estates. This was a difficult balancing act for Toyota, and the 70-series wagons never allowed occupants or owners to forget their utility ancestry, despite a welcome veneer of refinement. However, by the time of the 80-series Land Cruisers which appeared at the end of the 1980s, the Japanese company was able to produce a wholly credible alternative to the luxury 4×4 estates of the day. With the mid-1990s came yet another Land Cruiser range, this time the 90-series which was aimed at the middle range of the 4×4 estate market. Once again a first-rate product, it proved that 45 years of hard-won experience with light 4×4 vehicles had put Toyota out in front of the pack. Now that 4x4s appeal to such a wide market, I have no doubt that this book will have a wide appeal. It is certainly recommended reading for anyone intending to buy a Land Cruiser built in the late 1980s or the first half of the 1990s. With a total of 100 fully illustrated pages. SB. SKU: TOYL88 ISBN: 9781855203990 – Brooklands Books 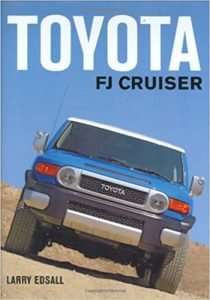 Toyota FJ Cruiser by Larry Edsall – Toyota’s legendary FJ40, the rugged off-road two-door Land Cruiser introduced in 1960, sold more than one million models in its lifetime—and is still in service in the roughest parts of the world, nearly a quarter of a century after the last one rolled off the assembly line. As Toyota prepares to roll out its new version of this classic, this book offers a close-up, behind-the-scenes look at the development and production of the new FJ Cruiser, a retro 4×4 that combines its famous predecessor’s unparalleled style with solid off-road capabilities and all the convenience and comfort that today’s technology offers. With interviews from the designers, engineers, and executives involved in making the FJ Cruiser, as well as more than 150 photos of the new vehicle and details on the 4×4’s specifications, this book puts readers into the driver’s seat of Toyota’s next classic Cruiser. ISBN 10: 0760324433 / ISBN 13: 9780760324431
Published by Brand: Motorbooks, 2006 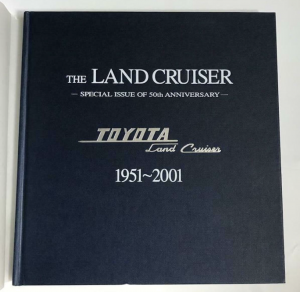 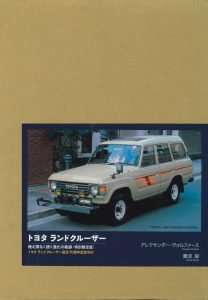 Who Needs a Road?: The Story of the Longest and Last Motor Journey Around the World by Harold Stephens and Albert Podell – This book is about two men who wanted to drive around the world, to remote corners, to those places where few men have ventured before. They wanted to do it in a four-wheel drive, taking their own camper-trailer with them, to live at the edge of deserts and at the rim of tropical jungles, to drive the highest roads, and the lowest, to be free to make their own choices, and the Trans World Expedition was born. This is their incredible journey. That they did it, and how they did it is their tale told in this exciting book.

“Toyota Land Cruiser 70 Series – The World’s Workhorse,” by Takeshi Namba – The most durable 4WD in the world, the safest vehicle to entrust your life – that’s the reputation of the Toyota Land Cruiser. So famous that it is known by name by everyone, even those who are not familiar with cars. Over 7 million have been shipped worldwide since production began in 1951, and there is no place on the globe you can go and not see a Land Cruiser. The more extreme the environment, the more active a role the Land Cruiser plays.

In particular, there is the legendary 70 series, successor to the simple and sturdy performance of the 40 series, which has earned the absolute confidence of drivers around the world. This series is unique in retaining one model over the 30 years since its release in 1984, without any major changes in the platform or exterior design.

The latest news is the 70 series single cab chassis achieving Australia’s ANCAP 5 star safety rating in late October 2016. The minor change made for a major milestone in the 30-year history of the 70 series, and a turning point to a new generation.

We have planned this book to graphically convey the gallantry of the 70 series, an indispensable tool used worldwide, and at the same time summarize its history. The book is a comprehensive presentation with a rich array of photos of the 70 series captured from around the globe, along with data such as production chronology, record of minor changes, and Toyota technician development concepts, for a large-format, luxurious limited edition collector’s version with high documentary value. 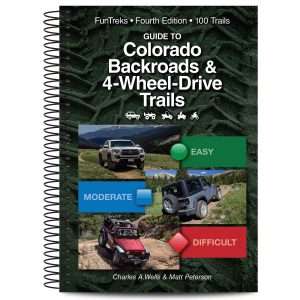 FunTreks Guide to Colorado Backroads & 4-Wheel-Drive Trails, 4th Edition – Technically not a Toyota book, but its a great book to have in your Toyota and do with your Toyota!!! This is a great book for those of us new to the state of Colorado and or those who grew up here and now getting into off-roading, 4WD, dirt road touring and or whatever you may want to call it… dare we even say…. Overlanding!? Colorado is a “MECCA” for the off-road community and these books are great resources for getting to know the dirt roads that connects us to the woods and backcountry. It’s so good, we dedicated an entire post just for this one book!
https://redlinelandcruisers.com/funtreks-guide-to-colorado-backroads-4-wheel-drive-trails-4th-edition-by-charles-a-wells-author-matt-peterson-author-susan-hindman-editor/ 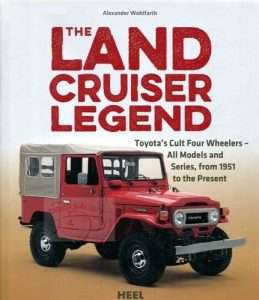 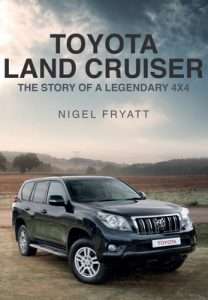 The Toyota Land Cruiser: The Story of a Legendary 4×4 By Nigel Fryatt – The Land Cruiser is Toyota’s longest continually produced model. From its start as a utility vehicle built during a period of economic gloom and uncertainty after the Second World War, it is now a well-equipped, luxurious and highly capable prestige SUV.This book covers all the changes that have taken place over the years to provide a complete history of the Land Cruiser’s extraordinary heritage. The coverage includes the Land Cruiser’s outstanding success in some of the toughest environments of the world, and what it takes to modify it to meet the toughest of conditions.Author Nigel Fryatt follows the extensive range history of the Land Cruiser from its earliest models, through the utility models, right up to the prestigious versions that exist today. The author draws on his considerable experience of both on-road and off-road testing to provide his informed professional judgement on this extraordinary vehicle. ISBN-13: ‎ 978-1445671734