Came across this image depicting a portion of a Toyota PickUp Truck while on an late night www-search “for all things Toyota” and discovered this artwork! 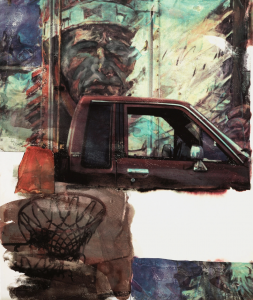 Simply because we are Toyota Fans! But what in the heck does a Toyota Pickup Truck, an Native American and a basketball goal all have in common and why are they depicted in an image together? ART!

At 75-years old, the American artist Robert Rauschenberg created the  “Native American”  as a color pigment print or giclee on wove rag paper. As to “why” he created the artwork using the image of the Toyota PickUp is anyone’s guess as there is not much obtainable information other than for “creative purposes” and or “artistic rights.” But it is simply cool to see the use of the Toyota pickup truck in the fine art world. Basically, I don’t think he was a Toyota enthusiast like you and I are, but simply using the image of the Toyota PickUp truck as “art” for art’s sakes or l’art pour l’art is good enough for me!

Considered by many to be one of the most influential American artists due to his radical blending of materials and methods, Robert Rauschenberg was a crucial figure in the transition from Abstract Expressionism to later modern movements. Robert Rauschenberg was proudly one-quarter Cherokee, and his upbringing and heritage figured strongly in his artistic output. Working in a wide range of subjects, styles, materials, and techniques, Rauschenberg has been called a forerunner of essentially every postwar movement since Abstract Expressionism. He remained, however, independent of any particular affiliation. At the time that he began making art in the late 1940s and early 1950s, his belief that “painting relates to both art and life” presented a direct challenge to the prevalent modernist aesthetic.
More info about Robert Rauschenberg https://www.pointofviewfineart.com/robert-rauschenberg

WANT YOUR OWN PRINT of the NATIVE AMERICAN WITH TOYOTA TRUCK? 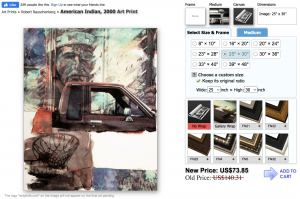 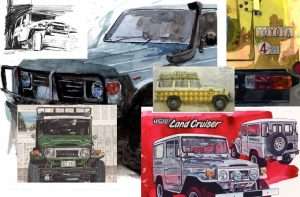